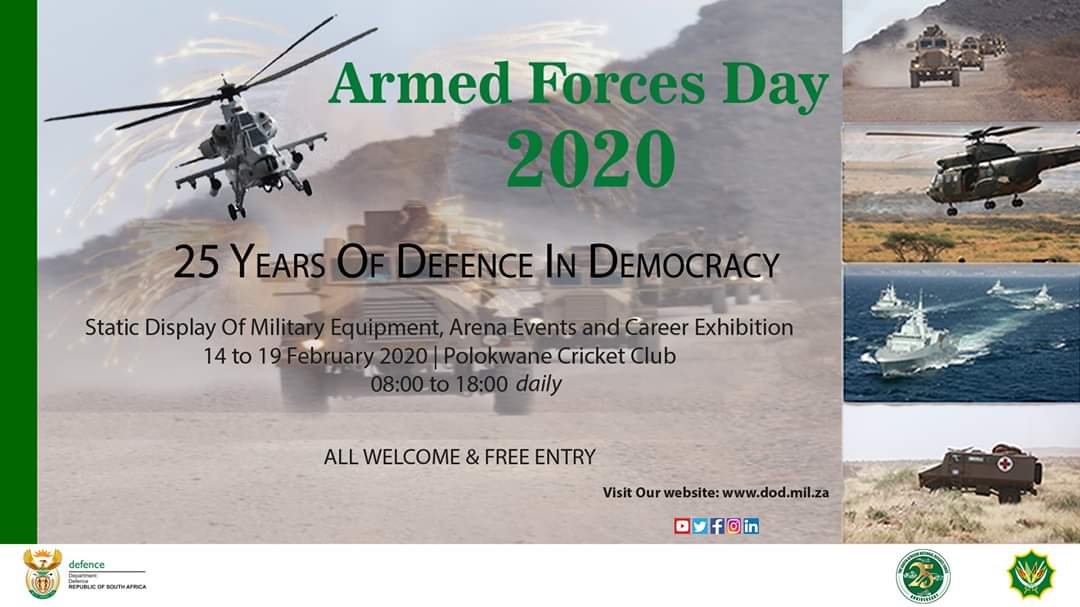 The South African National Defence Force (SANDF) is gearing up to present yet another informative, educational and intriguing weeklong military activities and static displays at the Polokwane Cricket Club from 14 to 19 February 2020, as part of the Armed Forces Day 2020 celebrations. Members of the public, military enthusiasts, scholars and most importantly young people and school-going children are invited to the Fan Park (Polokwane Cricket Club Sports Grounds) from 08:00am until 18:00pm. Live activities will include airlifting, fast roping, medical rescue and gun run.

According to Brigadier General Tsohane Sandra Lekalakala, Main Coordinator of the Fan Park, on behalf of the SA National Defence Force, the Fan Park is designed to allow the public to interact with the SA National Defence Force; for them to get exposure to their military. Its purpose and contribution to Armed Force’s Day is to exhibit the SANDF’s capabilities and to present different career opportunities within the SA National Defence Force”. As part of awareness and recruitment initiatives and in line with the Defence Force Review 2015, Fan Park activities will be aimed at exposing and “attracting young people to engineering, science and technology, thereby expanding and deepening the country’s technical skills base”. As with all other government recruitment drives, Brigadier General Lekalakala emphasised that submitting an application does not translate into automatic employment in the Defence Force.

The official opening ceremony of the Fan Park will be on 14 February 2020 at 09:00. On the day, Fan Park will cater for the first 30 schools and other young people. On Saturday, 15 and Sunday,16 February 2020, the focus will be on grade 12 learners and out of school youth. This will be done to ensure that the grade 12’s learning and teaching is not compromised. The remaining days, 17 to 19 February 2020 will be learners from Grade 9 to 11.

Notwithstanding all the heavy machinery, state of the art and technologically advanced military equipment that will be displayed, learners will also be afforded an opportunity to fly in the South African Air Force (SAAF) aircraft, depending on serviceability and weather conditions. According to the SAAF Fan Park Coordinator, Lieutenant Colonel Nthabeleng Mathye, the SA Air Force has made provision to fly (flip) 60 learners, daily. She explained that the selection of such learners will be conducted by the representatives from the Provincial Department of Basic Education and schools. On the day of the actual flip, each learner will be expected to produce a signed indemnity form. Copies of indemnity forms have already been forwarded to schools and are to be signed by parents or appointed guardians.

• Providing a stable environment in which to enhance the education of young people from disadvantaged backgrounds;

• Developing in young people from different communities and social sectors a national consciousness and cohesion; and

• Enhancing and deepening the integration of minority groups in the wider community”.

Members of the public are invited to come and interact with the South African National Defence Force personnel and witness their militaries might.